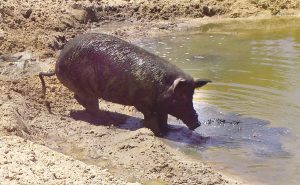 The local shire is using a specialist contractor and cameras to stop increasing numbers of the voracious predators breeding in Julimar, West Toodyay and elsewhere.

Feral pigs pose a serious traffic hazard on local roads – three were hit by a passing truck on Toodyay Road in Morangup last month, and another was hit by a car on the Bindi Bindi Road in Bejoording last October.

They can destroy hectares of crops in a single night, contaminate harvests and are a declared pest throughout WA.

The highly destructive animals foul water holes and displace wildlife by competing for food and habitat.

The shire has installed movement sensor cameras to detect feral pigs in known local habitats and plans this month to start using traps to cull numbers.

Most feral pigs grow to about half a metre tall and move in groups of about a dozen but are highly elusive and seldom seen.
Some people regard feral pigs as sport for hunters armed with guns and crossbows and have reportedly released captured animals into new areas deliberately to breed and proliferate for hunting.

The introduced species is regarded as one of the world’s most destructive pests with an estimated 24 million in Australia.

Feral pigs are distant relatives of domestic animals that early European colonists lost or released into the wild and have interbred with more recently escaped or released animals.

They vary considerably in size, shape and colour but tend to be black, relatively hairy, strong in their forequarters with a shorter back and have a longer snout than domestic pigs.

Like their farmed counterparts, feral pigs are highly intelligent animals, wily and are good at hiding – they are not easily seen but numbers are increasing, with local sightings only five kilometres from the Toodyay townsite.

Feral pigs can leave distinctive evidence of their presence.

The tracks can be mistaken for those left by sheep, goats or even cattle but soft ground can reveal the impression of dew claws at the back of a feral pig’s foot.

Feral pigs are omnivores that eat plants and meat.

They have a keen sense of smell and will dig up anything from small patches of earth to large areas up to 20cm deep in search of subterranean food such as bulbs, roots, earthworms, frogs and reptiles.

Small mammals are also on the menu, along with crops, livestock and carrion.

Agriculture WA says the cause of lamb losses can be shown in the following way:

“Pig predation on lambs may not be obvious as the carcass is often consumed completely; however, several features are reported to be characteristic.

“The lamb is caught after a short chase and killed by a bite to the thorax. The lamb is then held down by the pig’s forefeet and feeding begins with the intestines and viscera.

“The flesh and bones of the spine, ribcage and upper parts are then eaten, with the skin of the legs turned inside out to the stifle (knee) joint. The head is then eaten and finally all or part of the skin and remains of the legs are consumed.

“On a partly eaten carcass, the pattern of feeding and lack of bite marks and canine punctures should distinguish the kill from that made by a fox or a dog.”

The shire urges feral pigs sightings to be reported by emailing rmo@toodyay.wa.gov.au or by calling Reserves Officer Greg Warburton 0448 284 260.