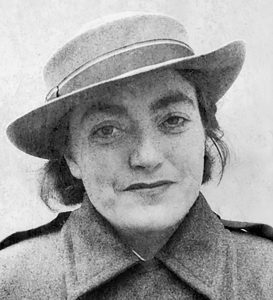 THE HEROISM of slain Toodyay World War 2 army nurse Alma Beard will be celebrated this month with the unveiling of an outdoor sculpture (right) at the town’s medical centre, which is named in her honour.

Toodyay RSL organisers will host the ceremony at the Stirling Terrace facility.

Alma May Beard was born at ‘Pell Mell’ in Bejoording in 1913, attended Toodyay State School and trained at Royal Perth Hospital before enlisting as an army nurse in 1941 after the outbreak of World War 2.

She was posted overseas and evacuated from British-held Singapore shortly before it fell to Japanese forces in February 1942.

Her crowded evacuation ship was sunk by enemy aircraft off Indonesia’s Bangka Island and 29-year-old Alma was one of 22 Australian nurses who were able to reach the shore in a lifeboat.

They started treating wounded survivors on the beach when they were captured by Japanese soldiers who ordered them back into the water where they were machine gunned in the shallows.

Only one nurse, Sister Vivian Bullwinkle, survived and, after spending more than three years in Japanese prison camps, she wrote to Alma’s parents to tell them what happened to their daughter.

She said Alma was the last in a line of nurses in the water to be shot.

Her last words were: “Bully, there are two things in my life I’ve always hated – the Japanese and the sea – and today I have ended up with both of them.”

“Her brave conduct in an hour of crisis has added lustre to the service which she so nobly carried on,” Sister Bullwinkle wrote.

Toodyay RSL affiliate member Colin Bird led the project which, after being unable to get Federal Department of Veterans’ Affairs funding, attracted a local benefactor who donated $2000.

Another $500 was donated by Newcastle Gaol Museum volunteers and, with work in kind and materials donated by trade suppliers and other donors, the $5000 project was finalised.

A Perth firm was commissioned to cut a life-sized metal silhouette of a nurse to stand in a setting of Toodyay stone and brickwork with a commemorative plaque.

The memorial will be unveiled in a public ceremony at the Alma Beard Medical Centre at 2pm on Wednesday February 16 – the 80th anniversary of Alma’s death.

Local RSL organisers plan to follow the unveiling with afternoon tea next door at the Toodyay Club, depending on State Covid-19 requirements.