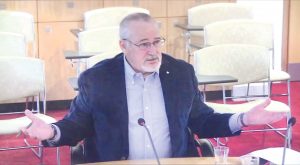 THE TOODYAY Shire Council and its neighbours should be axed to form a single new Avon Valley Council to save ratepayers’ money, a WA Parliamentary Select Committee has heard.

Legislative Council MPs were told that merging up to nine local shire councils into a single new local government authority would probably save the equivalent of all the rates paid in Toodyay, budgeted to total $6.54 million this year after a 2.5 per cent increase.

A 61-page submission by former Toodyay Progress Association chair Larry Graham (above) also called for a major rewrite of local government law, a parliamentary ombudsman to handle complaints and stronger powers for councillors to speak publicly about council matters.

Mr Graham is a former State MP who served 16 years in State Parliament as the member for the Pilbara before retiring from State politics in 2005.

He was Labor’s opposition regional spokesman for the Pilbara and Shadow Minister for Regional Development, North West, and Works and Services.

Mr Graham resigned from Labor in 2000 to retain his seat as an independent in the 2001 State elections and was also a member of the powerful Public Accounts and Expenditure Review Committee, Joint Standing Committee on the Commission on Government and Deputy Chair of the Standing Committee on Community Development and Justice.

He was back in familiar territory when he told an Upper House Select Committee on Local Government that there was a natural convergence of interests across the Avon Valley, from Beverley to Bullsbrook.

“You could save the equivalent of the rates of Toodyay by getting rid of five CEOs.

“You set up a corporate structure that allows things to work effectively and efficiently, and inside six months nobody would care what its name is.

However, the previous Barnett Liberal State Government had got politically “beaten up” when it tried to talk about altering WA local government boundaries.

Mr Graham said he had travelled from Derby to Esperance to prepare his Select Committee submission.

He prefaced his public submission – one of 171 presented to the committee – with a passage from US author Joseph Heller’s best-selling 1961 anti-war novel Catch-22:

Mr Graham told Select Committee MPs said that “when you get behind closed doors, there’s nobody seriously arguing that current WA local government electoral boundaries are the right boundaries”.

“If the current local boundaries didn’t exist and you walked into any party room and put it up on the wall and said ‘I think we need this for a system of local government’ how many do you think in your party room would adopt it?

“It doesn’t matter how many councils there are in WA as long as they are based on a community of interest and are financially viable.

“My view is they shouldn’t get the minimum Federal grant because they’ve made a choice that they can survive, and we should use that minimum grant money to go to other councils that actually need it, like country councils that are in diabolical trouble.”

“That’s how absurd it is,” Mr Graham said.

“We have other councils that are drowning in money and it’s an embarrassment for them that they can’t spend it.

“They have to think up reasons to spend the money yet within a council or two of them (geographically) is a council bereft of funds.

“This is due to the boundaries.

The Select Committee has received 171 public written submissions and is now conducting hearings, including in country areas, before it reports to the Parliament.