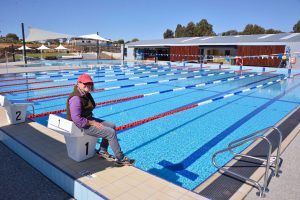 PLANS to heat Toodyay’s new public swimming pool (pictured left last August with swim teacher Colleen Sheehan) to enable it to stay open in winter have been delayed due to cost.

Venue manager Clublinks told a public meeting of about 50 people last year that it would pay an estimated $150,000 to $200,000 to install pool heating as part of a two-year contract with Shire of Toodyay.

Clublinks State Manager Matt Day told The Herald later that it might cost less than $10,000 year to keep the 25m pool heated to about 27C after heating was installed,

However, Shire CEO Suzie Hazlehurst said last month that the actual cost of installing pool heating was found to be nearly double the initial estimate.

A decision had been delayed “while we look at other options”.

The new pool was designed for heating to be added and the builder had provided an initial cost estimate.

There had been no formal council decision on heating but councillors were generally agreed that the pool should be heated, pending quotes and a decision on cost.

The delay is expected to disappoint regular swimmers who use the pool for exercise and hoped it could open in winter.

A Clublinks spokesperson said a decision on heating the pool lay with the shire.