$74m bid to mine Julimar home of rare endangered chuditch 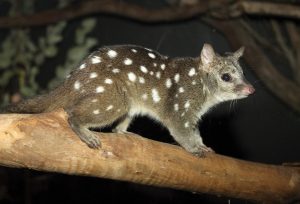 CHALICE Mining has begun drilling 70 test holes in Julimar State Forest as part of a $74 million bid to turn the nature conservation park into a “globally significant” mine worth billions of dollars.

The forest is home to one of the state’s healthiest remaining populations of the rare western quoll, commonly known by its Noongar name chuditch (pictured left), which is listed as an endangered species at risk of extinction.

Chalice has already drilled 700 holes on private farmland it bought south of the forest in 2020 and plans to drill hundreds more in the nearby conservation park later this year.

The Perth-based miner told the Australian Stock Exchange (ASX) on January 28 that it had obtained “key WA State Government approvals” to test “exciting targets along the extensive Julimar complex”.

Two “low impact” diamond drill rigs that did not require vegetation to be cleared have drilled four holes on existing forest tracks.

A further 78 holes had been drilled on private farmland north of the forest.

The miner said it was awaiting the outcome of two public appeals against a State Government decision to allow off-track drilling in the forest.

The appeals were “unlikely” to affect the company’s planned drilling program, it told the stock exchange.

“No mechanised clearing is required for off-track activity and trees and significant flora/fauna will be avoided,” Chalice said.

The mineral deposit is wholly within the Shire of Toodyay about 28km west of the townsite and crosses Julimar Road into the conservation park near Keating Road.

The shire said current drilling on existing fire access and recreation tracks was governed by a conservation management plan that prevented vegetation being cleared.

The 280sq/km Julimar Conservation Park was listed by the WA Department of Biodiversity, Conservation and Attractions in 2017 as home to one of the state’s “healthiest known populations of western quoll (chuditch)”.

The native mammal is the state’s largest carnivorous marsupial and protected by WA wildlife conservation law as “threatened fauna that is rare or likely to become extinct”.

The shy, solitary, cat-like creatures are largely nocturnal and use highly sensitive vision, hearing and smell to capture prey in a home range that extends up to 15sq/km for males and 3-4sq/km for females.

Much of the the Shire of Toodyay, including the townsite, was blanket pegged for similar minerals two years ago. 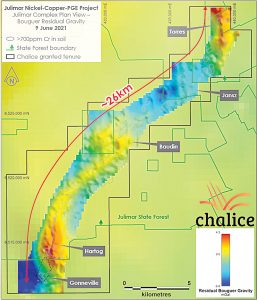 Drilling is currently underway along a 10km strip of a 26km-long deposit (pictured right) covered by an 8000sq/km exploration licence which lies mostly within the Julimar Conservation Park.

The lower part of the map shows ‘Hartog’ where forest drilling began in mid-January.

The company was also granted a State permit to drill beyond existing forest access tracks and told the Australian Stock Exchange that “while a delay is envisaged, the company believes the appeals are unlikely to impact the planned exploration drilling program”.

More drilling in the conservation park is planned further north in the ‘Baudin’ and ‘Jansz’ areas later this year.

Chalice has already drilled hundreds of holes south of Julimar Road on private farmland designated ‘Gonneville’ (shown bottom of map) that it bought two years ago.

The company told a Perth mining conference last month that its Julimar find was “world class” – one of the “largest greenfield discoveries in recent history”.

It was “positioned to become a globally significant and strategic source of battery and hydrogen green metals”.

Chalice said palladium was in short supply in a market dominated by Russia.

The miner tweeted after last month’s Ukraine invasion that Russia supplied 40 per cent of global demand for the rare metal, with prices at near-record levels of $3303 an ounce “on the back of Russian supply concerns”.

“Julimar project is in the spotlight as it hosts one of few major undeveloped projects,” Chalice tweeted.

Platinum was dominated by South Africa “with significant political and operational challenges”.

Nickel and cobalt were “key battery cathode materials in electric vehicles (EV)” with demand forecast to increase 19 times by 2040 and a “significant forecast supply shortage” due to a lack of new discoveries.

Copper was “used extensively in the green energy industry, including in renewables, energy storage and EVs in a market forecast to remain in deficit until 2026” due to a lack of new large-scale discoveries worldwide.

Chalice described itself as a “well-funded, high-performance team with an excellent track record” with “proven ability to discover and define mines and a track record of returning capital to shareholders”.

The company said it had raised $74 million in cash and investments and had delivered a 5000 per cent return to shareholders since the success of its first Julimar hole in March 2020.

Chalice bought Avalon Homestead in Julimar Road last year to establish a local base with overnight accommodation and has provided donations, sponsorships and in-kind support to several Toodyay community organisations.