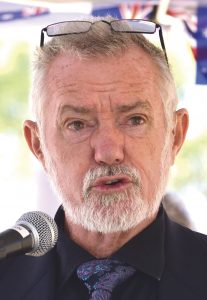 FOUR new Toodyay councillors have blocked a bid by former shire president Brian Rayner (left) to represent the council as a voting delegate at this month’s annual local government conference in Perth.

Cr Rayner said he should represent the shire at the conference instead of new Deputy President Beth Ruthven.

He said Cr Ruthven could still attend the WA Local Government Association (WALGA) annual general meeting at Perth’s five-star Crown Hotel on Friday September 25 – but not as a voting delegate.

Cr Rayner, who nobody voted for in 2017 because he was the only candidate to stand in the shire’s now-abolished North Ward, said he was a WALGA voting delegate when shire president last year and in 2018.

“We as a council need to be able to support WALGA,” Cr Rayner said.

“I believe in the last six months or so we have turned dead against WALGA, all their policies, and a lot of their processes and their advice.

“I believe we should have someone that is still willing to negotiate with the policies that WALGA provides and their advice.

“I don’t know whether we as a council are doing that at the moment, so that’s the reason I put my hand up.”

Shire President Rosemary Madacsi said Cr Rayner was entitled to his view but she “certainly wouldn’t support it”.

Cr Bell moved to nominate Cr Rayner, who seconded himself when nobody else raised their hand to support his nomination.

Cr Bell said it made sense for the outgoing shire president to guide and introduce new people to WALGA and other councils.

“As part of any sort of succession planning, you always have a hand-over between incoming and outgoing,” Cr Bell said.

“It seems logical that someone who has been there, has the networks and knows the people takes the incoming president – it’s nothing more complicated than that.”

Cr Rayner said he had attended five WALGA conferences, including two as president and two as a (non-voting) deputy.

“I have a fairly wide network of councillors from all over the state and I would like to still represent Toodyay as a councillor and delegate,” he said.

Cr Ruthven could still go as a deputy but not have a right to vote.

She said the Shire Deputy President should have a right to vote at the conference.

“As far as networks are concerned, I have attended phone meetings and had some contact with WALGA personnel and I think I’m up to the task.”

Cr Susan Pearce said it was important that the shire’s new President and Deputy President “meet, network and share ideas with these people and that they become known in local government through WALGA”.

The council then voted 5-2 (Crs Rayner and Bell against) for Deputy President Ruthven to join President Madacsi in Perth as the second of Toodyay’s two voting delegates.

Cr Rayner was unopposed when he nominated himself to attend the conference as one of two non-voting deputies.

There were no takers for the second non-voting spot.