‘Mrs Fix It’ plants silver sneakers fimly on the ground 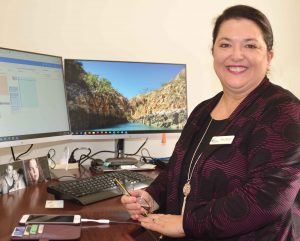 TOODYAY’S new shire CEO Suzie Haslehurst (55) may pad about her house in Dumbarton in a nifty pair of silver sneakers but she’s a person whose feet are firmly on the ground.

Suzie’s father migrated from Sri Lanka to WA when he was 18 and married Suzie’s mother, a Bayswater seamstress, in 1962.

The couple had two daughters, Suzie in 1965 and three years later Denise. Both grew up in Bayswater and attended North Inglewood Primary School and John Forrest Senior High School.

“My father was a newspaper machinist at Newspaper House and I remember as a kid visiting him on the nightshift when he was producing The West Australian – the noise was incredible and there was ink everywhere.

“Our parents were big on getting us involved in community activities such as Little Athletics, dance and gymnastics but our passion was dance.”

On most weekends, the closely knit family would head down to their caravan park home in Dawesville where she met her future husband Phil Haslehurst when she was 16 years old.

On graduating from high school, Suzie was accepted into the dance program at WA Academy of Performing Arts (WAAPA) and a career as a dancer seemed to be on the cards.

To earn a bit of pocket money while at school and at WAAPA, Suzie enjoyed teaching dance at high schools but realised that she didn’t want to be on stage once she graduated.

Her career in administration started in her early 20s when she worked for the Education Department producing school dance festivals.

“I really enjoyed it as I love to sort things out and get things happening.”

At 23 she joined 2DancePlus dance company as an assistant administrator touring with the company to WA’s North-West and around Australia.

Suzie worked her way up to become general manager and stayed with the company for nearly 13 years, overseeing the name change to Buzz Dance Theatre which brought more contemporary dance to new and bigger audiences.

During her time as general manager she worked with three artistic directors who all had different ideas and styles of working.

In 1988 she married childhood sweetheart Phil and the couple had two children.

Phil, a tiler by trade, wanted a career change and in the mid-90s they started three years with a three-month old baby in tow running a computer-generated sign shop in Fremantle which Suzie said “nearly killed them”.

“Now when things get a bit tough we joke that ‘at least we’re not in the shop’.”

The Haslehursts opted in 2001 for a sea change and moved with Sam (7) and Chloe (2) to Broome where Suzie’s sister Denise was living.

Suzie hit the ground running as financial administrator of Magabala Books, a national Aboriginal-owned publishing house established to prevent third parties misappropriating indigenous stories and illustrations, which had built a national and international reputation for its publications.

“It’s the most isolated publishing house in the world. The Magabala is a bush banana that spreads its airborne seeds widely which is what we did with the cultural stories we published.”

When Suzie arrived, the company was in deep trouble and had lost all its funding due to concerns about lack of governance in the organisation. The English CEO was made redundant and Suzie had to turn around fiscally unsound practices and attitudes that flourished under the former administration.

She stepped in as acting-CEO, organised training in governance for the board members and used her experience with arts funding to secure funds to get the company running again.

During her 11 years at the helm of Magabala Books, Suzie implemented better book distribution deals, both nationally and internationally, oversaw the introduction of E-book publications and spearheaded the move to bigger and better premises.

“You have to give your all – or what’s the point. But it was time for new blood at Magabala and the new CEO is doing a great job.”

Suzie embarked on another steep learning curve in 2012 when she joined the Shire of Broome as Manager of Community Development.

“Local government is a tough environment which is heavily legislated with 179 pieces of legislation that local governments must consider in addition to the Local Government Act.

During her four years at Broome Shire Council, Suzie often acted as Director of Community and Economic Development where she managed to resolve the shire’s problems with its uneconomical recreation and aquatic centre.

“I’m a passionate advocate for community development. Sport and recreation including our pools and ovals are the heart of the community, especially in regional areas.”

This passion led to Suzie’s appointment as Chairperson of Country Arts WA for eight years and National President of Regional Arts Australia for three years where she advocated strongly for the importance of arts in regional communities.

During their 15 years in Broome while Suzie was building up her advocacy, financial and people management skills, Phil was tiling and project managing the four new homes they built in town. “Phil needs a project,” quips Suzie.

In 2016, Suzie’s mentor Paul Martin encouraged her to join him in his new job as CEO at the Shire of York which had recently undergone a major upheaval where the entire council was sacked and a commissioner appointed to oversee the running of the shire.

In the aftermath of the civic crisis, Suzie had to call on all the skills she had learned previously to perform as Executive Manager of Corporate and Community Services and stepped in as acting-CEO on numerous occasions.

“They called me Mrs Fix It,” laughs Suzie who believes transparency, team work, respect and integrity are essential in advising a cohesive council.

“A combative approach is not the way to go and you need to find a way to work together to get the best outcome. Everyone needs to support each other.”

Suzie isn’t someone who will shy away from a challenge and welcomes the six-month probationary period in her new Toodyay job which she says will “give us time to get to know each other and find ways of working together effectively”.