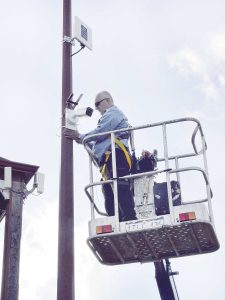 STREET cameras guarding Toodyay’s central business district have been disconnected by Western Power because they are unsafe.

The town’s video security system is linked to multi-display screens at Toodyay Police Station that have been blank for months.

The security failure made state-wide news in August 2019 after an attempted car theft at Toodyay Autos in Stirling Terrace when there was no vision from a faulty shire camera mounted on a light pole directly across the road from the scene of the crime.

The town’s security cameras were upgraded under the direction of former shire CEO Stan Scott in 2019 after years of delays.

The new cameras – some with advanced vehicle number plate recognition technology – were understood to be incorrectly earthed.

“There was no written agreement and to the best of our knowledge, the cameras were installed by the shire without Western Power approval,” a power utility spokesperson said.

“Western Power inspectors were alerted to the cameras and upon inspection deemed them unsafe and disconnected the power.”

Toodyay police say there are 14 shire-owned video security cameras in the central business district, including two at Duidgee Park.

Video camera display screens inside Toodyay Police Station have been blank for months and the viewing software is frozen.

Police have been unable to trace the occupants of wanted or suspicious vehicles by using number plate recognition to check if potential offenders have been in Toodyay.

Some shire cameras are installed on Western Power light poles and the rest are mounted on other supports.

The shire installed six security cameras in Stirling Terrace in 2019, including five on light poles.

Acting Shire CEO Tabitha Bateman said a search of shire records had failed to find any evidence of a written agreement with Western Power in 2019 to mount cameras on light poles owned by the State power utility.

She said the problem was raised with Western Power last year but the shire had yet to hear back after being promised a response by February.

It is understood Western Power discovered that its light poles were being used without permission when a work crew was called out last year to check a report of water spouting from one of its Stirling Terrace light poles.

It resulted in all shire cameras on Western Power light poles being disconnected because they were ruled to be unsafe.

The power utility said its engineers had since designed and developed new equipment to make the fittings safe.

“This connection type has been specifically designed for this type of application so that local governments and other customers will be able to use this design to mount a range of products, including safety cameras, weather stations and other sensors,” the spokesperson said.

“Testing has now been completed with the first set of permanent installations expected to be completed by July.

“The original prototype testing was scheduled earlier but was delayed for six months due to global supply chain issues.

“Western Power will complete the work, including the mounting of the equipment.

“Maintenance and operation of the cameras will be done by the shire.

“Costs for this project are yet to be finalised.”

Western Power said one other WA local government authority had a similar problem.