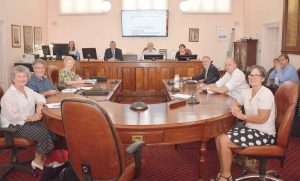 By Michael Sinclair-Jones
NEW SHIRE President Bill Manning says he is confident all members of a radically altered Toodyay council elected last month can “work together as a united team”.

His statement followed the swearing in of four new councillors after a big turn-out of local voters backed a united call for change.

President Manning and Cr Ben Bell were also sworn in after retaining their seats with a similar reform agenda at the October 19 WA local government elections.

The new-look council signals a major shift in policy direction after years of division and rancour.

It culminated this year in heated disputes over repeated rate rises and a secret council backflip to reverse a decision not to offer Shire CEO Stan Scott a new contract and award him a 2.5 per cent pay rise instead.

Crs Manning and Bell opposed both decisions but were outvoted 6-2 by the former council in May and July.

Toodyay’s new council now faces the impending outcome of a year-long State Government inquiry into the shire administration and former council’s operations, actions and culture over the past six years.

A report and recommendations are expected to go to WA Local Government Minister David Templeman by the end of next month to decide if further action is required.

Three former councillors who served for four years during the investigation period – Judy Dow, Eric Twine and Rob Welburn – did not re-contest their seats when their terms expired last month.

The four new and two re-elected councillors in order of votes received were:

President Manning was elected for two years to resume his previous four-year term after resigning on principle to contest last month’s election, and the others until 2023.

The unsuccessful candidates were:

Toodyay’s 45 per cent voter turn-out for last month’s postal ballot of 3425 electors conducted by the WA Electoral Commission was well above the state average of 28.5 per cent for WA’s 139 councils.

It was the first time all Toodyay voters were allowed to vote for all candidates after the council decided last January to abolish shire electoral ward boundaries.

A secret ballot to elect a shire president at the first meeting of the new council last month resulted in a 4-4 deadlock between Cr Madacsi and former deputy president Chitty (Cr Greenway absent on council-approved leave) after former president Rayner said he would not re-nominate for the shire’s top job.

It is understood that President Manning and Crs Ruthven and Pearce voted for Cr Madacsi, and Crs Rayner, Bell and Hart voted for Cr Chitty.

The special council meeting was adjourned for a week.

Crs Chitty and Madacsi withdrew their nominations at the resumed meeting to enable Cr Manning to be elected unopposed as new shire president.

A second secret ballot for deputy president resulted in the election of Cr Madacsi (five votes), followed by Cr Chitty (two) and Cr Bell (one).

It is understood President Manning and Crs Ruthven, Pearce and Hart voted for Cr Madacsi, Cr Rayner voted for Cr Chitty, and no other councillors voted for Cr Bell.

At the new council’s first ordinary meeting next day, President Manning said he was pleased “to have the opportunity to work with all of you as representatives of the community”.

“You all bring to the council table your intelligence, your experience, your skills and, most of all, your enthusiasm to make Toodyay a better place in which to live,” he said.

“The community expects us to work together as a united team and I am confident we can do that.

“There will be differences of opinion, of course, but these need to be handled in a polite and respectful manner, and the majority decision needs to be accepted.

“At the end of the day, our collective responsibility is to represent the interests of the community as a whole.

“When we are considering matters before us, the question we always need to ask ourselves is ‘what is in the best interests of the community?’”