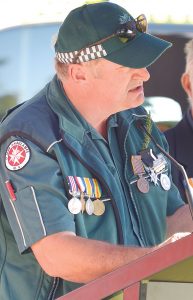 Mr Wroth, who was awarded a prestigious St John Ambulance Cross (pictured) for “outstanding service” by WA Governor Kim Beazley at Perth’s Government House in April and is also a Toodyay Fire Control Officer, was sacked after allegations that he made “disparaging” remarks about ambulance service administration at a Northam emergency services forum held in July.

St John’s head office dumped Mr Wroth as Toodyay sub-branch chair, cancelled his 39-year volunteer membership and locked him out of the town’s Stirling Terrace ambulance depot that he helped build 11 years ago.

Local volunteers were not told why their widely respected leader was sacked, and Mr Wroth was “reminded” by St John that he was bound by an “obligation of confidentiality” not to tell anyone what happened. 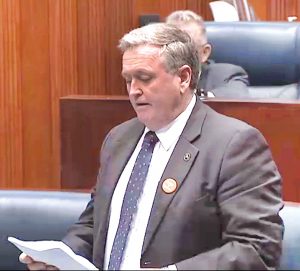 It drew a scathing rebuke in State Parliament from local Nationals WA MP Shane Love (right) who said he was “shocked and dismayed” at the way Mr Wroth was treated.

He told the Legislative Assembly that unlike others in paid employment, Mr Wroth had “no clearly defined rights”.

“He has no recourse, and after decades of service offered freely, he, his family and fellow volunteers have been dealt a gut-wrenching blow,” Mr Love told MPs.

“Spare a thought during the coming holiday season for those St John Ambulance volunteers who may not be enjoying a festive time with their loved ones because their mobile phone has rung and they have been called away.

Mr Love later said he had been contacted by ambulance volunteers throughout his electorate – which stretches from Toodyay to Kalbarri – “who are as angry as the Toodyay folk about what has happened”.

“St John need to understand that there is a view among many vollies across a number of districts that they are not valued and respected by St John,” Mr Love said.

“The changes we are making will be a positive step forward and the community should have confidence that they will continue to receive the highest level of service from St John,” Mr Fonte said in a written statement issued from Perth.

A St John’s media and public relations consultant said there would be no further comment due to “privacy considerations”.

It is understood Mr Wroth was sacked for criticising the organisation’s emergency response policies at a private forum organised in July by Nationals WA Leader Mia Davis.

Mr Wroth told the 13-member closed forum that Toodyay ambulance volunteers were frustrated that their local paramedic is not allowed to attend ambulance call-outs.

Similarly, St John’s only local staff member who is also a trained ambulance officer is not allowed to help make up the required numbers for a two-person ambulance crew if needed for emergency call-outs.

As a result, spare local ambulances can’t be used during office hours if only one volunteer is available.

Local volunteers were also frustrated at being called to transfer non-urgent patients to hospital at 3am, and at other times being stood down after responding to call-outs.

The adverse findings included that Mr Wroth told a Northam St John staff member at the forum who had previously served as a volunteer that they had “gone over to the dark side” and that “you can’t say much with management in the room”.

Mr Brink said Mr Wroth had “failed to adhere to the (St John) code of conduct”, and appeared to “lack awareness regarding appropriate and professional behaviour when representing the organisation at an external forum”, raising “serious concerns regarding your judgment and ability”.

Mr Love said he was one of three Nationals WA MPs present at the private forum in Northam and none of them heard Mr Wroth say anything that anyone could regard as derogatory or offensive.

“Charlie raised the same things that we have heard from ambulance volunteers right across the state, from Albany to Karratha.

“St John needs to re-examine the way they speak to volunteers and issue a public apology to Charlie because what they did was beyond the pale.”

“The notes were provided only after a call from St John’s Wheatbelt regional manager with an assurance that they would be used only to improve internal processes of St John,” Mr Love said.

“There was nothing in the notes that anyone could regard as offensive.

“The staff member who provided those notes now feels terrible about it and blames themself for what happened to Charlie.”

“The idea was to talk freely in an informal closed session about important issues, which we all did,” Mr Stewart said.

“Nobody said anything that could have provoked anyone.

“If anyone took offence, it was very narrow thinking.

“I was surprised there was an investigation – into what?

“It looks like someone put a target on Charlie’s back and was gunning for him.”