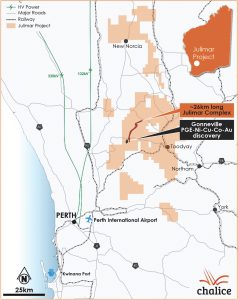 The 16-suite Julimar Road guesthouse in West Toodyay had been on the market for $1.78 million since February last year and includes two conference rooms.

Chalice bought the 2.3ha property for an undisclosed sum last month and says it will use the premises for staff accommodation.

Dr Carney holds a Doctorate in Ecology and Evolutionary Biology and an Honours Degree in Natural Resources from the University of Adelaide and previously held senior health, safety and environment posts for BHP’s $20 billion outer harbour development in Port Hedland and at Woodside Energy’s $15 billion Pluto LNG Project at Karratha.

Managing Director Alex Dorsch told the Australian Stock Exchange (ASX) last month that her appointment would help “advance our major project towards development as a long-term supplier of many of the critical metals required to decarbonise the global economy and reduce pollution”.

Shares in the cashed-up Perth explorer rose sharply to 5.46c on April 1 after the company informed the Australian Stock Exchange a week earlier of “highly encouraging” new results.

These include tests for palladium, which fetches more than $2500 an ounce (28.3g) on world markets, as well as nickel, copper, cobalt and other platinum group elements.
Palladium is highly sought after on world markets for use in catalytic converters to reduce vehicle pollution in petrol engines.

The platinum group elements are regarded by major car manufacturers and ‘clean energy’ industries as “critical metals for electric vehicles and other energy storage applications”.

They add to drilling results on 945ha of private land – which Chalice calls ‘Gonneville’ in nearby Keating Road – which the company bought last year for a total of $14 million in cash and shares.

Chalice says it has yet to apply for State Government permission to drill in the environmentally sensitive State Forest to confirm the full extent and potential cash value of its Julimar discovery. 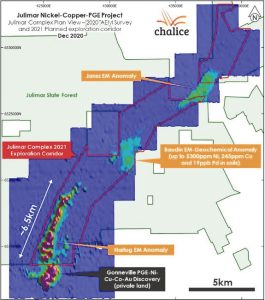 “The results are considered to be highly encouraging,” Mr Dorsch said.

They were “mostly aligned along the strike from Gonneville. making these high priority drill targets”.