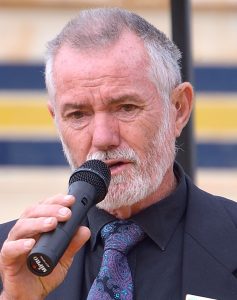 – and that’s only in the last four years

THE SHIRE of Toodyay says it has spent a total of $699,481 of ratepayers’ money on lawyers in the last four financial years.

The figure was revealed by Shire President Brian Rayner (left) at last month’s council meeting in answer to a written question on notice from Cr Ben Bell.

The shire spent at least $5380 on legal fees in November 2018 when it prosecuted an English tourist who parked facing the wrong way in Stirling Terrace (legal in the UK) to obtain a $60 fine – but failed to recoup costs.

The shire lost a further $36,500 in legal fees last October when it prosecuted a Dumbarton resident for an alleged dog attack on sheep only to have a magistrate call the shire’s case “absolutely shocking” and “duplicitous” and warn she would order an acquittal if the shire didn’t withdraw its court action.

A response was sought by 5pm on the Friday to meet September Herald production deadlines.

President Rayner responded at 3.23pm on the Saturday.

“In relation to legal expenses your question includes the legal expenses that you have reported on frequently over the last four years and you have substantial information available already on those expenses,” President Rayner said.

“So in relation to the balance of the legal expenses which approximate $45,000 per year this includes planning advice and SAT (State Administrative Tribunal) representation, advice on implications of the South West Native Title Settlement on shire lands, preparation of legal documents, and routine enforcement and prosecution matters.

“This can include matters like dog attacks and ignoring total fire bans.

“In another example the shire was obliged under the Local Government Act to take enforcement action in SAT for non-compliance by a councillor with Standards Panel Orders.

“Council does not become involved in engaging lawyers except when council is contemplating civil action or needs specific legal advice.

“Enforcement of State laws, local laws and planning instruments is an administrative matter, and enforcement and prosecution is not and should not be a political decision.

“The CEO (Stan Scott) has delegation to engage lawyers appropriate to the task at hand.

“For example there is a single law firm providing advice to several local governments on the same matter so it is much cheaper to share those legal expenses.”

President Rayner failed to respond to a repeated Herald request to reveal how much of the $699,481 spent on lawyers was recouped.

The shire also spent a further $11,900 this year on a private investigator to examine a Shire Code of Conduct complaint against President Rayner and Mr Scott.

This matter is now under internal Freedom of Information review and potential appeal.