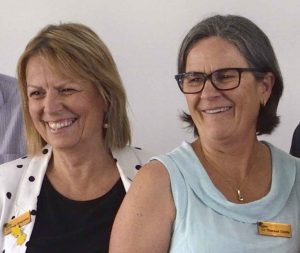 It followed last month’s ordinary meeting when three councillors led by Cr Therese Chitty (pictured right with Cr Paula Greenway at  the official opening on November 21) used a short break to sign a formal demand for an immediate special meeting.

Cr Chitty had tried earlier to raise her concerns over the absence of a signed contract as new business “of a very urgent nature that leaves the council at risk”.

The 4-4 deadlock was broken when President Madacsi used her casting vote to defeat Cr Chitty’s motion 5-4.

Cr Chitty said she had sought “a little bit of outside advice” and that “if we don’t have an executed contract, we have left ourselves a little bit exposed as a council and an organisation”.

She said she had obtained verbal advice from “an ex-lawyer who hasn’t practised for quite some time” and WA Local Government Association Governance Manager James McGovern.

Without a contract, we leave ourselves wide open,” Cr Chitty said.

“To me that rings alarm bells – the risk is if someone hurts themselves seriously … there’s a huge risk without a contract.”

Both she and Cr Greenway said they discovered there was no signed contract with new venue manager Clublinks on the weekend of November 21 when the shire’s new $14 million recreation centre was officially opened.

It was a “classic example” of councillors not being informed, she said.

Cr Greenway refused, and President Madacsi issued her with a formal caution.

Cr McKeown said the lack of a signed contract meant it was “not at all clear” who was responsible for public liability and workers compensation insurance at the site.

He said councillors had agreed to the essential terms for a contract on September 22 and the pool had been open for five weeks.

Cr McKeown asked why it had taken so long for the contract to be finalised.
“Who bears responsibility if an accident happens on that site?” Cr McKeown asked.

“If we haven’t got a contract, should those people be there?

“Should the site actually be open?”

Shire CEO Suzie Haslehurst said there was “clear legal intent” of an implied contract based on documented evidence of the essential terms.

“We have a clear letter of intent to enter into the contract,” she said.

She said the contract was within a “hair’s breadth” of being signed after “a bit of pushback” about the parties’ maintenance roles and responsibilities.

Both parties had sought legal advice.

“It’s a brand new site, and really tough to work out what’s going to be needed – that has been the major hold-up,” Ms Haslehurst said.

“The risks are actually being borne by Clublinks at the moment.

“They have in place public liability insurance and the facility itself is insured by the shire.”

Councillors voted 5-3 for Cr Chitty’s motion, seconded by Cr Greenway, that a contract be signed within eight days.

They were joined by Crs McKeown, Rayner and Pearce, and opposed by Crs Madacsi, Ruthven and Hart.