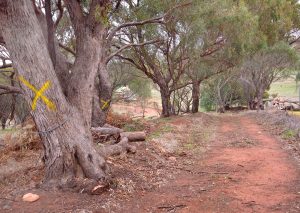 RECORDING error at last month’s Toodyay Shire Council meeting resulted in the reversal of a 4-3 decision to turn a muddy track (left) in West Toodyay into a gravel road.

Viewers who left before the end of the 4½-hour live-streamed meeting missed seeing the decision reversed after Cr Ben Bell challenged it on a point of order.

He said an absolute majority vote of at least five members of the normally nine-member council was needed for the motion to pass because it called for the shire to spend extra money not included in 2019-20 shire budget.

Shire President Rosemary Madacsi earlier declared a proximity interest and left the chamber because she owns a property adjoining an impassable 110m section of North Street that is currently closed to traffic.

Shire Deputy President Beth Ruthven chaired the debate among the remaining seven councillors (one seat vacant) which resulted in what was initially recorded as a 4-3 decision to open and upgrade the road.

However, the motion was later declared lost because the decision to spend unbudgeted money lacked an absolute majority.

Cr Bell said the council was trying to cut costs and did not need to spend an extra $95,000 on a road that was already closed.

Cr Susan Pearce, whose motion to re-open North Street was seconded by Cr Brian Rayner, said successive councils had debated the issue for 20 years and a decision was needed.

Cr Ruthven later served a notice of motion for this month’s council meeting at 4pm on Tuesday June 23 that North Street’s temporary closed status between Fitzgerald Terrace and Collett Way be removed and that $95,000 be considered in the shire’s 2020-21 budget to surface it with gravel.