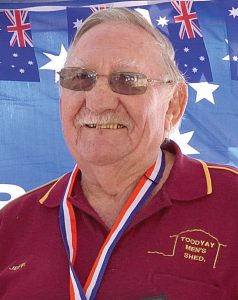 A COURT-FUELLED rift in the Toodyay Men’s Shed has led to mass resignations and the formation of a new rival group that has registered the name ‘Moondyne Men’.

It followed a verbal dispute between the pair after five former Men’s Shed committee members – including the chairman and secretary – resigned their elected positions and quit their Shed membership on April 14.

The former committee had voted 4-1 on March 10 for Mr Roberts to resign from the committee over several emails he sent to other members and for “serious concerns” about his ability to continue in the role.

Mr Roberts resigned from the committee later that day “so as not to cause the elected representatives any embarrassment of drawn-out mediation or litigation”.

Former Men’s Shed vice chairman and “Shed Boss” Fred Fellowes failed a month later to secure a committee vote of no-confidence in the Secretary and Chairman.

The vote was lost 5-2 with only Mr Fellowes and Steve King voting in favour.

Mr Fellowes then tabled a note signed by nine Men’s Shed members that required a special general meeting of all members to be called, prompting the five who voted against his no-confidence motion to resign.

At last month’s Northam court hearing, Mr Jeff Roberts and Mr Webb accepted the magistrate’s view that the restraining order sought by Mr Roberts should not go to trial.

Neither side was understood to have been represented by lawyers, and the pair agreed to sign a “mutual understanding” provided by the court for them to sign this month.

Mr Jeff Roberts wrote in this month’s Men’s Shed column on Page 12 that “gaps” had been filled after a “glitch” in the “normally smooth running of the organisation”.

An interim committee had been formed.

Mr Hill said Moondyne Men had been incorporated as a not-for-profit association and had 18 new members – mostly from the Toodyay Men’s Shed – who meet weekly at the new Toodyay RSL Hall in Clinton Street.

Members meet at the RSL Hall on Mondays and Thursdays from 9am to noon, and for breakfast on the last Saturday of the month from 8.30am.