LOCAL resident and former State MP Larry Graham was threatened with police eviction from the CWA Hall last month prior to the controversial auction of a shire-owned property next to his Duke Street home.

Mr Graham, former chair of the now-defunct Toodyay Progress Association, had claimed in July that the proposed sale was “unlawful” and should be “cancelled” for being originally advertised incorrectly. 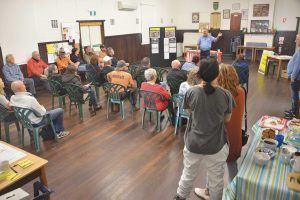 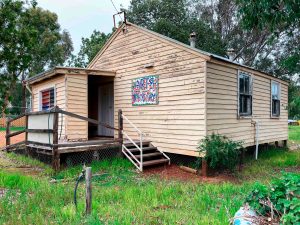 The shire-owned property next door to his home contains a dilapidated timber-framed building (left) that was transported from Cue to Toodyay in 1919 for use as manual training schoolroom before it was again moved to its current site and used as a police station.

The building consists mainly of one large room with an unsewered outdoor toilet at the back.

It is not on the Shire of Toodyay heritage list or municipal inventory and is not State heritage council listed but is noted in council policy as being in the town’s central heritage area and having “some” level of significance.

The land is currently zoned R10 for a single dwelling with plans to increase the zoning to accommodate three strata-titled units.

The current building is not designed to be a dwelling and is unsuitable for family use.

In 2008, the Toodyay Historical Society supported moving the building about 60m to a new site in Clinton Street.

Mr Graham told a July council meeting that he would refer the shire’s proposed land sale to the State Administrative Tribunal and the WA Ombudsman because he said it “breached council policy”.

He said in the chamber after the meeting that the council was “telling lies”.

A shire letter read out at last month’s auction said that local planning policy provided a “presumption against demolition” and that council approval must be sought “should demolition be proposed”.

Prior to the start, Mr Graham began handing out leaflets to about 30 people present, including potential buyers.

Auctioneer Tony Maddox went over to Mr Graham and asked him to stop.

Mr Graham told Mr Maddox that the auction was being held in a public place which meant that he was legally entitled to continue handing out his leaflets.

Mr Maddox said the CWA Hall was on private property and that it was his auction to conduct without interference.

Mr Graham continued arguing and was  told by Mr Maddox that if he did not stop handing out the leaflets, police would be called to remove him from the premises.

Mr Graham was then seen to depart the hall  with his leaflets and return empty-handed.

Mr Maddox said later that the incident was extremely upsetting, and his hands were clearly shaking when he read out the terms of the auction prior to calling for opening bids.

“I’ve been an auctioneer for 27 years and have never experienced anything like this before,” Mr Maddox said.

Mr Maddox said he had earlier received two letters from Mr Graham warning that he risked personal liability for “punitive action” if potential buyers were not given “critical information” that would affect the “price, owners’ costs and all future works”.

It is understood the shire also received several letters and emails from Mr Graham in the weeks and days leading up to the auction.

Mr Graham – who served three terms as Labor MP for the Pilbara from 1989 to 2001 and one term as an Independent MP (2001-2005) – declined to respond to requests on his Facebook page and from The Herald to disclose the contents of his auction leaflet.

Bidding for the Duke Street property opened at $50,000 and resulted in a successful offer of $75,000 from a Perth buyer.

It is understood the new owner plans to use the building initially as a ‘weekender’.

Mr Graham later declined to return  a Herald phone call for comment and texted  the following message on condition it be printed in full or not at all.

“Because of your Facebook posts I no longer have any confidence that you can report objectively.

“The only comments I wish to make are that every claim I made about the heritage of the property was validated.

“A level of disclosure was made that verified both that heritage status and the protections afforded by council policy.

“Without my intervention the council would have acted unlawfully.

“The original advertisements to remove the building from the property were withdrawn because to take that action was unlawful.

“The council still has never been advised correctly that their own policy and town plan protected this property.

“I met the new owner and wished him well.”

Two other shire-owned lots in Telegraph Road – one with a house on it – were sold as a single parcel to local civil contractor Vernice for $265,000.

Last month’s land sales were the first in a series of public auctions of 12 shire-owned residential properties to help pay off shire debt during what local real estate agents describe as a local land sales boom.