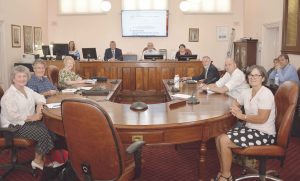 TOODYAY shire councillors have voted to cut their pay by 2.2 per cent after a heated debate last month about whether they should be paid more money.

The decision was opposed by Deputy President Rosemary Madacsi, and Crs Phil Hart and Susan Pearce.

The actual amount of money or percentage that would be saved was not revealed or discussed at last month’s marathon council meeting which started at 4pm and ended at 10.15pm after a half-hour dinner break.

Councillors earlier voted 5-4 to defeat a motion by Cr Rayner, seconded by Cr Paula Greenway and supported by Crs Ben Bell and Therese Chitty to cut allowances and fees to 50 per cent of the maximum State rate – a saving of about $36,000 a year.

This followed a shire administration recommendation to increase councillors’ payments to 80 per cent of the maximum State rate – costing a further $13,700 a year – “to reflect what appeared from discussion to be the common view” behind closed doors at last month’s council strategic forum.

“If you want to annoy people, that’s the way to do it.

“If you think this council had a bad reputation before the last election, see what people say after they read this in The Herald,” Cr Bell said.

Deputy President Madacsi said good representation on council required recognition that not everyone had the means to absorb the wage losses and extra costs associated with being an elected member.

“If we’re not careful, we will make the council exclusive only to those who can afford it and retirees,” she said.

Cr Chitty said she agreed that increasing councillors’ fees and allowances was “not a good look”.

“I think we need to take a pay cut and save money in the budget ‒ I will vote for 50 per cent,” she said.

Shire President Bill Manning said he didn’t think councillors should be giving themselves a pay rise but 50 per cent of the State maximum rate was “too drastic a cut”.

“If we cut it to 70 per cent, that brings us pretty much in line with other similar councils,” he said.

Cr Rayner said if councillors adopted 50 per cent “it would show we’re in this for the right reasons, not the wrong reasons.

“It’s an important job like teachers – if you don’t pay enough, what do you get?” she said.

Cr Greenway disagreed, saying “We are supposed to lead our community and now is the time it is needed”.

“Being financially reimbursed is not part of being a councillor,” Cr Greenway said.

Cr Susan Pearce said “wages are not a part of it – it’s recognition of what we do.”

Toodyay councillors currently get paid $1080 a month to attend meetings, President Manning gets $3366 and Deputy President Madacsi gets $1503, which is about 80 per cent of the State maximum rate.

They are also entitled to claim payments for internet, phones, travel and other expenses, budgeted this year to total $21,600.