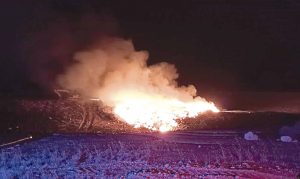 TWO TOXIC fires at Toodyay’s controversial new landfill dump for millions of tonnes of metropolitan rubbish have caused the Shire of Toodyay to express concern to the State Government.

The first fire burnt for about two weeks underground at the Hoddys Well site last month.

It was followed a few days later by a surface fire in a different area that required three Toodyay fire units to help extinguish.

The second fire created a cloud of toxic smoke and caused State authorities to issue a hazard alert for nearby Clackline Road.

In particular, Opal Vale was not equipped to deal with an after-hours fire.

The letter followed initial shire contact with the Department of Water and Environmental Regulation (DWER) to report shortcomings in the company’s fire-fighting capabilities.

The second fire occurred on the surface at night.

It was attended by two units from Toodyay Central Volunteer Bush Fire Brigade and one from the Toodyay Volunteer Fire and Rescue Service.

Fire and rescue volunteers were called because landfill fires contain toxic materials and require different firefighting techniques, equipment and training than those used for bushfires.

Two bushfire brigade tankers were used to provide fire and rescue service volunteers with bulk supplies of water that had to be brought in from elsewhere.

It is understood Opal Vale’s operating licence requires it to cover surface rubbish on the same day that it is dumped.

Opponents said landfill fires were notoriously hard to extinguish and could burn for weeks underground if heat generated by decomposing organic waste came into contact with oxygen.

Local residents also feared that landfill fires could release toxic fumes over surrounding homes and farms and pollute local creeks that feed into the Avon River.

Opal Vale’s long-term plan was to dump three million tonnes of rotting metropolitan waste in Hoddys Well over the next 20 years.

The rubbish would be carried by an extra 60 rubbish trucks a day on Toodyay Road.
Opal Vale is not listed in the White Pages telephone directory, does not have a website and could not be contacted for comment.